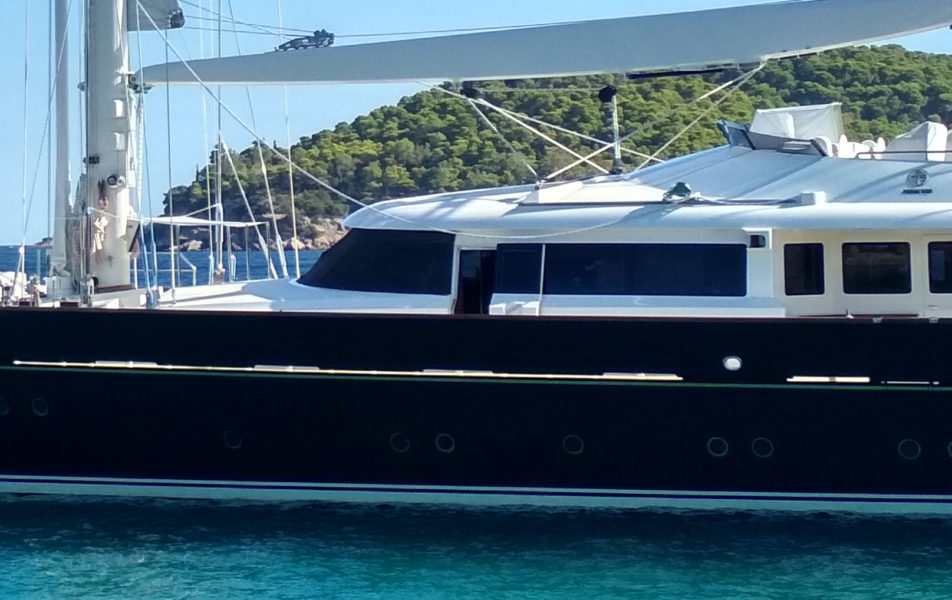 Why did you choose Kymeta?

S/Y Xasteria has had the same owner since she came out of the Perini Navi shipyard for the first time in 1995 where he was heavily involved throughout the design and construction stages. He was therefore keen to keep the clean lines the yacht currently enjoys while also upgrading – something that was not really possible with the addition of twin VSAT antennas.

Both myself and the owner have a keen interest in the latest technology. On a previous command I had worked with e3 to install Kymeta panels and had a very positive experience in terms of service and connectivity. I therefore suggested the panels to the owner and after some research we made a design brief.

The aim of the refit was to upgrade Xasteria with the most up-do-date technology without impacting the original design. We were looking for a satellite solution that would not be visible to guests walking around the yacht – essential for such a classic yacht as Xasteria.

How did the installation go?

Following a consultation with e3’s engineering team, a full brief was provided. The original design included four panels, however it was decided to install two panels initially to prove the concept worked. The first part of the installation was carried out by the e3 engineering team at the shipyard during our refit over the winter of 2018, followed by the commissioning of the system once the yacht was back in the water. Overall it took seven days of work including the installation of a new onboard network and a Hybrid system with two Kymeta panels and 4G – all starting from scratch!

To meet the required aesthetics, both panels were sunk into wells and as such cannot be seen from the side. Each well is designed with maintenance access and drainage.

All the team on board were, and remain, very enthusiastic about being the first yacht to have such an installation and prove that the system can work even with all the challenges that we set for functionality and design. 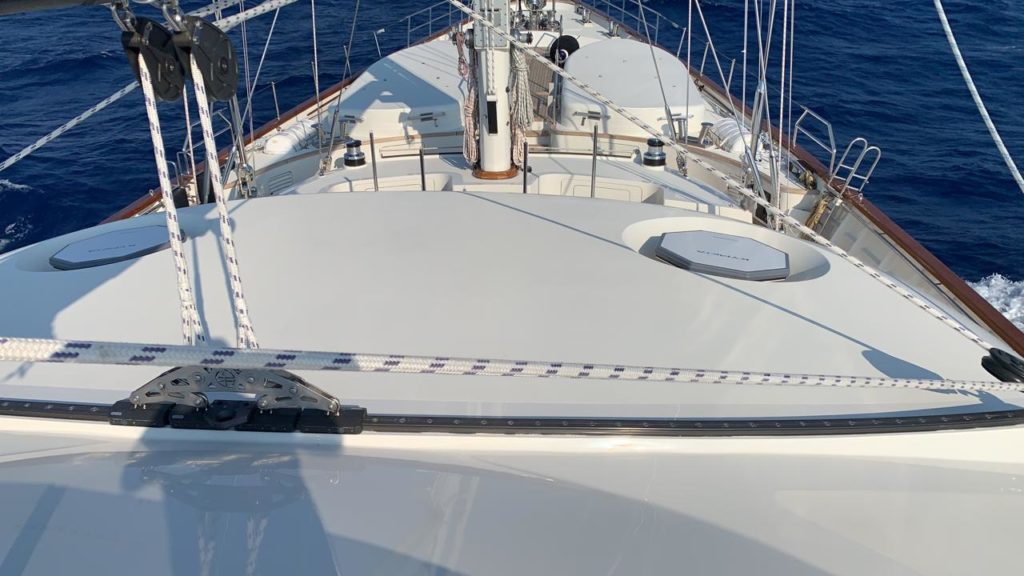 How has the performance been?
As expected the performance has been exceptional. Airtime coverage was provided from e3 using their new eSAT service which provides excellent coverage across Greece and Turkey using the new Hellasat 4 service. We received 2,8 to 4,2 mbs from the Kymeta panels 90% of the time on the basic data plan which was our choice for this first year of use. To achieve this it was necessary for e3 to “invent” new settings as there had been nothing like this before. In my opinion, the 10 days of fine tuning was impressive and I respect all the people that worked for that around the clock.

The only issue encountered, as was expected, was that with only two panels the yacht experienced occasional mast shadow, but the communication flaw was covered nicely (in costal trips) by the Hybrid system 4G. In the near future we have the possibility to implement “step 2” and add one or two additional panels for ultimate coverage.

How has the experience been for crew and guests?
Owner, guests and crew have been impressed with the performance of the panels over the summer, which they have successfully used for all data connectivity including TV streaming.
Following the refit, the owner was very happy, commenting that we had managed to improve the yacht and add so much technology in the way that he couldn’t have expected.
Xasteria was awarded for its design in 1995 and once again we feel like we are ahead with the recessed satellite flat panels. 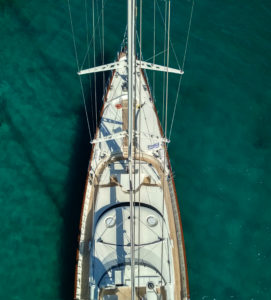 How has your experience been with e3?

In addition to the Kymeta panels, the yacht runs a complete e3 HYBRID solution which seamlessly combines VSAT, 4G, IT and network distribution. The yacht also enjoys full remote support from e3’s support operation centre – ensuring all systems are working to their best ability 24/7.

Due to my positive past experience and confidence with both Kymeta and e3, we decided to remove all other satellite and 4G systems and only use the e3 Hybrid system.

As ever, e3 have provided excellent service and it was a pleasure to work with them again. The team are always quick to respond and were there with technical support every step of the way during installation. Communication is very easy and fast, and their online platform is a great tool for keeping records and good order of everything that, as a Captain, I have to be aware.

What would you say to those thinking of switching to Kymeta?

My experience on board two busy superyachts using Kymeta systems is very good. From the earliest version on the first yacht to the latest version we’re using now, I see a complete robust system that can meet the requirements of every captain and owner.

All captains will like the fact that it is a maintenance-free system and that e3’s support team is in a position to prevent issues before we notice them, and if needed to take over the situation remotely and fix something rather than asking the crew to test things, which is riskier and time consuming for a busy crew.

Owners on the other hand will benefit from the good service, the powerful reception and a better looking yacht without the need to compromise on the aesthetics by using a powerful large-sized communication systems. The internet speeds that you can reach with this system are fast enough to be able to support any current system, from business communications to guest entertainment and even smart yacht systems.

Also, calculating the long-term benefits of this investment, we can see the that the use of Kymeta satellite panels is becoming ever-more attractive with the rates for satellite coverage decreasing year on year.