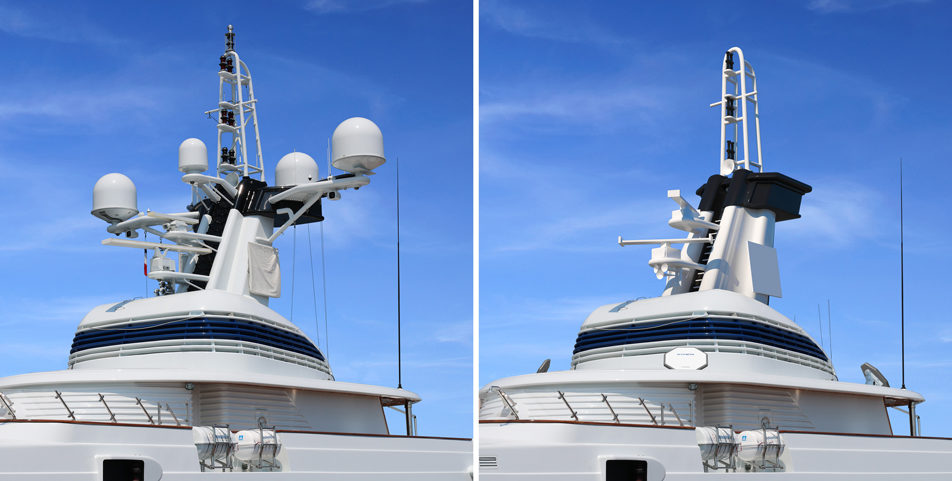 Kymeta and e3 Systems worked with the owner, captain, and IT manager of the White Rose to perform the months-long sea trial, and outfitted the yacht with four Kymeta KyWay terminals. The terminals were tested with various MIR/CIR services from leading maritime satellite service providers, including Speedcast, which provided service in the Mediterranean. Upon completion of sea trials and commercial release of yacht solutions, Kymeta terminals will be bundled with Kymeta’s KĀLO™ internet access services – powered by the IntelsatOne Flex for Maritime service. The terminals can also be outfitted with MIR/CIR services from service providers like Speedcast.

“We trialed multiple terminal configurations, ranging from single panel solutions to multiple panel solutions. We experienced a few practical installation issues, many of which already have been addressed by Kymeta, and we also realized that the network systems on yachts need to be designed and configured to work in tandem with the improved throughput that Kymeta solutions provide,” said Roger Horner, Managing Director at e3 Systems. “The flat panel beam steering of the antenna and its performance has been fantastic, and we are pleased that the issues found and communicated are already being addressed. Identifying and solving issues is what sea trialing is all about.”

The trials presented Kymeta and e3 engineers with the opportunity to identify and replace various components – both hardware and software. As a software defined antenna technology, Kymeta KyWay terminals used at the trial were given improved and added functionality, remotely, which has never been possible before with traditional mechanically steered antennas.

“The months-long sea trials with the White Rose have provided our engineering team with valuable insights for maritime installations. While we experienced some challenges during the trials, it wasn’t anything we couldn’t overcome, and it is now clear that domeless vessels are a new reality for the yacht industry,” said Håkan Olsson, Vice President of Maritime at Kymeta. “This is a major milestone for the maritime industry, where reliable, flat, lightweight satellite connectivity will open an entirely new world of communication capabilities.”

The trialing period also afforded Andrew Schofield, captain of the White Rose, to witness firsthand the ease with which Kymeta communication solutions can be updated and managed – even while at sea. “One day while testing the Kymeta solutions at sea, the e3 Systems and Kymeta teams removed terminals, changed components, and reinstalled them within minutes,” said Schofield. “With conventional antennas, we would have been in the yard for a few days with a crane to achieve the same results. The quick installation of the Kymeta solution is a big time and money-saver.”

Schofield recognizes other benefits in addition to saved time and manpower. “We have been anticipating Kymeta technology since 2015 when we first saw conceptual animations of the technology,” said Schofield. “We are proud to be the first motor yacht to perform sea trials with Kymeta technology. We look forward to progressing from the current temporary trial installation to the finalized fully-integrated solution, which will rid the yacht of the current VSAT and TVRO domes. This will remove over five tons of weight from her super structure and provide the yacht with permanent access to the internet.”

About Kymeta
What’s the missing link to connecting billions of people to high-speed mobile access? Antennas. And Kymeta offers the world’s only commercially-viable electronically-scanning satellite antennas and terminals. Kymeta antennas and terminals deliver high-throughput communications for land, sea, and air, making mobile connectivity as available as a view of the sky. Plus, the world’s largest satellite operator, Intelsat, has joined forces with Kymeta to deliver KĀLO global access services that combine with Kymeta antennas and terminals to provide revolutionary mobile connectivity. Without Kymeta mTenna™ technology, connecting and staying connected to all those new satellites while on the move will be difficult, if not impossible.

If it moves, Kymeta will keep it connected. Anywhere.

About e3 Systems
e3 Systems® is a leading communications integrator and solutions provider for the marine industry. The company connects yachts globally through a diverse portfolio of communication systems including its HYBRID solution which synchronises VSAT, Inmarsat, Iridium, 3G, 4G and Wi-Fi.

In addition, e3 provides an extensive suite of services covering cyber security and training, comprehensive IT support, data management through the Advanced Monitoring and Management System e3.ARMMS, and content provision including TV and internet.

e3 operates from the Mediterranean and the USA with thirty partners worldwide. It is part of the marine electronics group grupoarbulu.