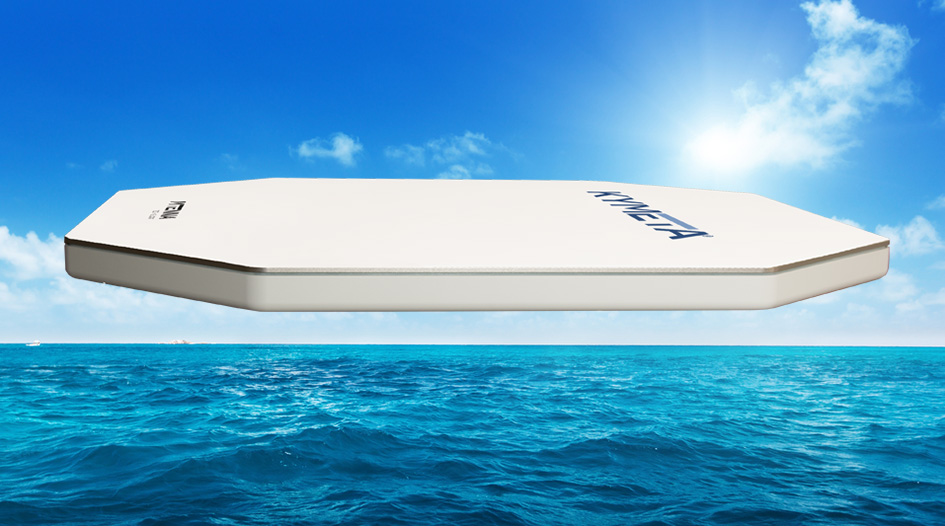 After more than three years of extensive research and development, flat-panel satellite antenna company Kymeta announced on 7 March that it’s metamaterials-based, electronically steerable mTenna solution is now commercially available. Speaking to SuperyachtNews before the official announcement was made, Hakan Olsson – Kymeta’s vice president, maritime – is clear that this signals not only a major step for the for the company and the progression of flat panel technology, but also for the mobile comms industry as a whole. “Here we are, three and half years after we started to talk about it and now we have a product,” he enthuses. “Isn’t that exciting?”

Following a live demonstration rig set up at the 2016 Monaco Yacht Show, the prototypes have been through a number of engineering cycles to finalise the product and also to undergo further testing. “The units have gone through pretty rigorous maritime environmental testing,” says Olsson, “including temperature cycling from -40 to +100 degrees Celsius every 30 minutes, IP66 water ingress testing and so on. The commercially available products are going to arrive on the first yachts in May and June this year and what we will be doing is the next level of testing in real conditions on those yachts to make sure it all works as expected.”

Each of the selected superyachts will initially conduct operational tests with single-panel installations while cruising in the Mediterranean, with a second phase of testing in August and September focusing on a full-featured “global solution” using a minimum of four panels per installation and a combiner. “That’s where the system chooses the best panel that is most optimally orientated towards the satellite to get the best gain and throughput,” Olsson explains.

While at this point Olsson cannot divulge which yachts will carry the first panels during the May/June trial phase due to nondisclosure agreements, he says that there is a mix of sail and power vessels and hints that they include at least one of “the most prominent yachts you can think of”. The plan is for the yachts carrying the initial panels to then incorporate them more formally during planned winter refit programmes at the end of the year, while also removing conventional domes and their support structures. “It’s going to be three or four yachts for the May/June trials,” says Olsson, “and then for August/September there will be significantly more because at that point we’re going to enable our partners, both e3 Systems and Panasonic’s key partners, to go and put systems on yachts themselves. In the meantime we have also continued our discussions with shipyards and refit centres so that there is a portfolio of yachts already being designed for our panels with either flush-mounted or even recessed antennas,” Olsson continues. “So we are well underway with pretty much all the prominent shipyards and designers.”

Olsson is also quick to point out that this announcement refers to the commercial availability of the antenna itself. “We are still working on the combiner and we are expecting that to be commercially available as soon as Q4 2017,” he clarifies, “but it needs to undergo some more testing and development before we can announce that as commercially available.”

While both Intellian and Cobham are producing terminals for use with the Kymeta panels, Kymeta has also built its own terminal – initially to ensure that early adopters of the flat-panel tech are not constrained by dependency on the availability of third party equipment. But alongside the hardware development comes news about the evolving partnership with Intelsat and in particular work on building a network for mobility markets such as connected cars, demonstrated last year when Kymeta installed one of its antennas in the roof of a car which was subsequently driven all over the US. It coincides with the news of Intelsat’s strategic partnership with the OneWeb low earth orbit (LEO) satellite constellation, which will open up considerable new avenues for connection and bandwidth. “It’s a fantastic value proposition for our antenna in combination with that network,” Olsson enthuses, “because ours is the only antenna that is going to be able to seamlessly connect between the LEO and geostationary satellites in the network, and that is exactly what is going to be needed for the connected car. But it also means that on the design horizon we will have satellite solutions for vessels much smaller than superyachts, even down to 30-foot weekenders who want to stream Netflix when they are out. Those are the kinds of solutions we envision being enabled in the next few years.”

There is also the additional benefit of drawing on Panasonic’s multicast live TV offering which currently numbers eight channels with multi-language support, and which will likely expand to 20 channels by the end of 2017. “A great benefit is that you get the service wherever you are in the world, as opposed to today’s solutions where you have one set of channels available in Europe through Sky, for example, but then have to switch to direct TV with a completely different set-up when in the Caribbean,” says Olsson. “What e3 Systems has done as one of the early system integrators is that they are complementing that in offerings to yachts and shipyards with IP streaming for additional channels. You can do that thanks to the higher throughput you get with a Kymeta-based system and the Panasonic service.”

While it will still be a few months before multi-panel installations are seen on yachts, it is clear that Kymeta’s extensive research and development phase is nearly at an end. “The key message,” Olsson concludes, “is that the technology is finally here and you can start to order it. But what you will see this year is the next level of sea trials to really refine and make sure it works in a real environment for yachts, and then you’re going to see in 2018 the commercial deployment for the early adopters and it’s going to scale from there…”