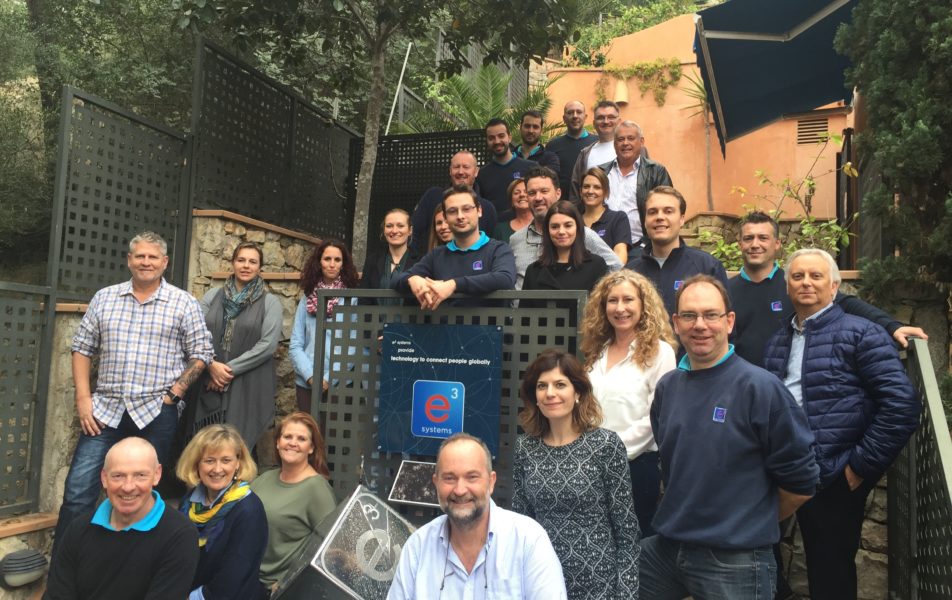 Mallorca, February 3rd, 2016 – Last week the e3 team congregated at their head office in Mallorca to celebrate the company reaching its 20th birthday. Team members travelled from Malta, France and the US to spend a busy week on product briefings, team building events and motivational presentations.

“The serious work was followed by a fun group challenge event which involved teams working together solving clues in order to “break out” from locked rooms. As a communications company staff were devastated when instructed to part with their smart phones for the duration of the exercise to ensure no cheating,” commented Diane Franklin, e3’s Marketing Manager. “Forcing them to have over an hour’s break from the internet was a challenge in itself”.

e3 was founded in 1996 and two of its original partners Roger Horner and Alan Walker remain at the helm. e3’s evolution and success runs parallel to the development of the internet and the growth in the size of the superyacht fleet.

“Our mission statement is “to provide technology to connect people globally”. Superyacht owners, guests and crew want, and need, seamless connectivity to the internet when moving from the shore on to the yacht. We make that happen,” explained e3’s Group Managing Director, Roger Horner.

He went on to describe the company’s growth over the past 20 years.

“We evolved from the small internet café in tiny premises to become a leading communications integrator in the superyacht market. Key milestones along the way for us include installing the first Inmarsat Fleet 77 on a yacht in 2002 and the first VSAT solution in 2004. We have been innovators in GSM solutions and data management and are currently working to introduce the first flat panel antenna on a superyacht. We have a great creative team who are passionate about what we do and we are all looking forward to the next exciting development of dome-less yachts”.

The celebratory week was capped by the unveiling of a stainless steel cubed sculpture specially commissioned for the occasion and, rumour has it, a night out on the town dining and dancing.

e3 Systems has been a leading, technology agnostic, communications integrator in the yacht market for the past 20 years. e3’s mission is to connect people globally using their diverse portfolio of communication services including VSAT, Inmarsat, Iridium, 3G, 4G and WiFi.

e3’s HYBRID solution is controlled by the data management system e3.ARMMS to control data service quality and costs. Data distribution including IT, networks, service and support with Standard and Enterprise solutions, covered by SLA contract support, is also included.

e3 were the first to introduce a managed hybrid solution to the yacht market ten years ago which is just one illustration of their successive introductions to the industry of cutting edge solutions. They also provide content including digital TV and IPTV, newspapers, magazines and video.

The thirty plus strong team operates from the Med and the USA with thirty global Partners. e3 is part of the large marine electronics group grupoarbulu who have engineers worldwide.