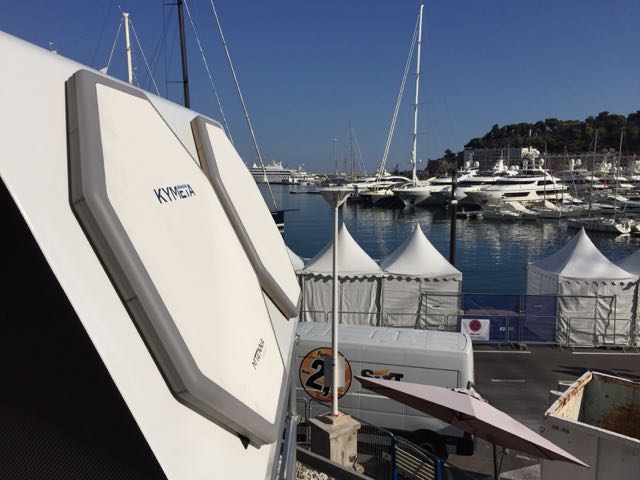 The demonstration was a stunning example of what will be possible beginning in Q2 2017. Kymeta mTennau7 ASMs simultaneously received eight live Panasonic multicast eXTV channels, performed multiple live Skype video sessions, multiple HD and Ultra HD Netflix video sessions, and provided Wi-Fi access to an average of 80 users at any one time during the show. The demonstration also confirmed the low-power consumption of the Kymeta mTenna® technology, drawing only 12 watts of power per ASM.

“We are laying a strong foundation for our maritime market launch and it is exciting to share these results with our partners and customers,” said Håkan Olsson, vice president of Maritime, Kymeta. “The demonstration of the maritime product throughout the Monaco Yacht Show will be closely followed by further product testing on various vessel types in December and continue in early 2017 through commercial availability in Q2 2017.”

Partner Ecosystem Supports Pre-orders
Beyond Kymeta mTennau7 ASM performance, the company and its partners including Panasonic, iDirect, Intelsat, Intellian, and e3 Systems form the ecosystem that will support the mTenna technology deployment.

“Several of the world’s most iconic yachts have now signed up for the Kymeta mTenna technology as a direct result of the successful demonstration in Monaco, with many other commitments from superyacht owners and designers expected to take place over the next few months. We are excited to begin pilot production in December 2016 and launch commercially in 2017,” said Olsson.

Kymeta has built an ecosystem of partners to deliver the mTenna technology to the maritime industry.

“Several shipyards and top marquee yacht designers approached us interested in being the first to integrate Kymeta’s flat-panel antennas into their new builds. We have taken pre-orders during the show which will allow yacht owners, captains, and management companies to secure early delivery of Kymeta solutions,” said Roger Horner, managing director, e3 Systems.

Interested? Let us Know:
Pilot production for the Kymeta mTennau7 ASM begins December 2016 with planned commercial availability of this product in Q2, 2017. Yacht owners and maritime technology administrators interested in trials or deployment can learn more at http://www.kymetacorp.com/nodomes.

Kymeta delivers on what connectivity is meant to be – secure, available, universal and global. Kymeta is removing barriers by providing an innovative means of leveraging satellite network capacity for high bandwidth communication access while on the move. The company’s first product, a software-enabled metamaterials-based electronic beamforming antenna for satellite communications, will keep boats, planes, cars, and more connected.

The company has been awarded the 2016 Seattle Business Silver Tech Impact Award for Emerging Technology, the 2016 AHEAD Innovators Award, which were closely preceded by the Frost & Sullivan 2016 New Product Innovation Award. The company has also been recognized as a CNBC Disruptor for two consecutive years, a FiReStarter by Strategic News Network and a top 50 MIT Technology Review Disruptive Company. Kymeta has formed significant partnerships with industry leaders including Toyota, Intelsat, Panasonic, Inmarsat, Airbus Defence & Space, Sharp, Intellian, O3b, and more. If it moves, Kymeta will keep it connected. Anywhere. The company is based in Redmond, Washington and operates on a worldwide basis. For more information, please visit www.kymetacorp.com.