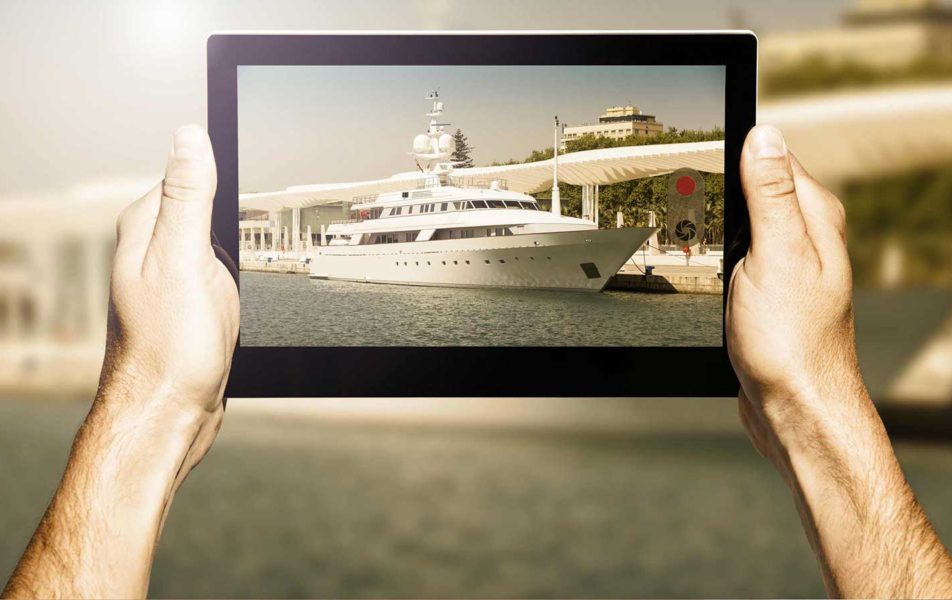 Yachts spend over 80% of their time inshore

We have been providing land and marine satellite communication services to yachts for the last 20 years, and have therefore accumulated a considerable amount of research analysis. We have discovered that the average yacht spends 84% of its time during any one year inshore, typically in range of land based connectivity such as GSM, 3G, 4G and 4G LTE.

We have seen the introduction of GSM, GPRS and 2G and the growth of 3G services, which was slow, and now 4G LTE which is fast. There is now extensive coverage along the shorelines around the Med.

If a yacht does venture outside the 12nm coastal limit, more often than not, it returns to shore in the evening to enjoy shore-based facilities such as restaurants and casinos.

That is when the 3G and 4G LTE services come into their own. We are seeing average 3G speeds of 20Mbps down and 50Mbps for 4G LTE around the Med. When these are combined using an aggregator, you can experience 200Mbps.

What this means is that, when inshore, the yacht can have very fast and cost effective data communications of the type which allows heavy data use such as IPTV streaming and movie downloads.

A single monthly 60GB 4G service will provide 60 hours of live TV watching for €180 in that month! That is reasonable and very useable.

Belt and braces data connectivity for this summer – keep your job, and encourage charter guests to return!

At this level of cost we recommend doubling, tripling or quadrupling the SIM card capability for use when inshore and then back it all up with a flexible, base backup VSAT contract and it will still be considerably faster and less expensive than trying to do it all using VSAT.

You can then be sure you never have the issues you had last summer, when the owners and guests complained every day about Internet access. If the owner can’t connect, he may well sell the boat and you may well discourage charter guests from repeat booking.

It’s possible to improve the data connectivity on board with the correct combination of services and technology, but the solution’s success depends upon the correct on-board configuration of data management, IT and network systems. You might have good data connections off the yacht, but if you have a poor quality network and access points on board, then it will be a waste of time. It’s the same as building a fantastic house on poor foundations.

Current state of play with regard to European roaming charges

The European regulation that was adopted on 25th November, 2015 to abolish roaming charges requires the Commission to submit a report to the European Parliament by June 2016 along with proposed legislation for the regulation, with the view to eliminate the transitional roaming surcharges by June 2017. So, this is still on track. With this in mind, a couple of our big service providers are introducing roaming free data services on their networks.

We have worked with our largest service provider in Europe, Vodafone, to be one step ahead of the game and we have launched a Data Roaming SIM for yachts that is available now.

The service works across 23 countries, which include all the Vodafone networks around the Med, northern Europe, India, Australia, New Zealand and South Africa. The service is at fixed rates with no roaming charges and uses one APN across all the countries. We have negotiated a range of high monthly data allowances which have an auto rollover of 1GB at a time for only €25. It will not roam onto networks that are not part of the agreement, thus avoiding Bill Shock.

One of the pleasures of the Med in the summer is the variation in cruising grounds in different countries and yachts are constantly on the move from country to country. This service will be ideal for that period, is available for a minimum of 3 months, provides flexibility in cruising plans, so is ideal for the cruising summer period.

If a yacht is to spend a high proportion of its time in one country then we can provide national contract services for that country, again with high monthly allowances but available for only one month at a time.

All our services can be upgraded or downgraded by the month to allow for high use charters or low use during downtime. We provide a single account for all the services, including the satellite services, and billing is fully automated and secure.

EC urges mobile industry to hurry up on 5G

The signal technology of 5G has also been improved for greater coverage as well as spectral and signalling efficiency. These improvements stand to further enable changes like pervasive computing by embedding microprocessors in everyday objects and the Internet of Things (IoT).

Although 5G is not scheduled for launch until 2020, some manufacturers are already incorporating elements of the coming standard’s specifications into their products.

Gunther Oettinger, the European commissioner for the digital economy, called CEOs from Europe’s leading operators and vendors to a meeting in early January to discuss progress on 5G.

Oettinger believes Europe must be a leader in this area.

The European Commission has announced various initiatives designed to encourage 5G deployment, and is reported to be worried about how economic rivals such as China, Japan and South Korea have given the technology a priority.

They are forecasting a $5 to $8 billion fall in revenue for their 2nd quarter from revenue of $58 billion for the same period last year.

It represents Apple’s first revenue decline in 13 years. Apple CEO Tim Cook confirmed the company expects a fall in unit sales for the iPhone in the second quarter.

Net income in the first quarter was up by 2.2% as compared to the heady days, just last year, when they achieved 30%!

The company sold 74.8 million iPhones in its first quarter, which ended 26th December 2015. This was the first full quarter of sales of the iPhone 6S and 6S Plus, although the performance represented a growth of only 0.4 per cent. That’s the lowest since the handset was launched in 2007.

So, still pretty outstanding sales, but they are slowing down. The iPhone is not the most prolific smart phone in the world by a long way, as Samsung now dominates the market. Apple continues to have the most expensive product, and it will be interesting to see whether or not they introduce a new entry-level product in order to capture more business in the big markets of Brazil and China.

For further information on any of the above, please contact us.